The past week found the West Central Area/Ashby/Brandon-Evansville wrestling team in action twice.

On Tuesday, the squad headed to Glenwood and took on the Minnewaska Lakers.  The Thursday meet with Morris Area/Hancock/Chokio-Alberta had to be moved to Friday when the Morris school was closed on Thursday.

The Lakers entered the day with a salty 3-3 record. A team that has lost a few duals but is capable of some damage if allowed to hang around. The first match pitted a pair of top ten wrestlers and gave the fireworks desired. The Lakers took the early lead with an overtime decision. At 113 lbs Evan Dingwall gathered a first period fall for the Knights which swung the advantage to the Knights. Minnewaska answered back with a pair of pins at 120 and 126 lbs regaining the lead by a score of 15-6. For the Knights, Adam Lohse earned a fall at 132 lbs and Sam Olson took a forfeit as the Lakers were unable to supply a 138 lber. The tide had shifted back to WCAABE 18-15. The Lakers continued the see-saw scoring game with a decision at 145 and a pin at 152 lbs, regaining the score 24-18. This would be the last of the points and the final swing in score for the Lakers as the Knights went on a scoring rampage...Hunter Gruchow started the comeback with a fall at 160 lb. That knotted up the margin at 24 apiece. Jeremy Blascyk took the lead with a major decision. The Knights kept it rolling as Beau Robinson earned a decision, Will Rustan bullied his way to a major and Justin Blascyk gathered a forfeit at heavyweight. The final score was 47-24. 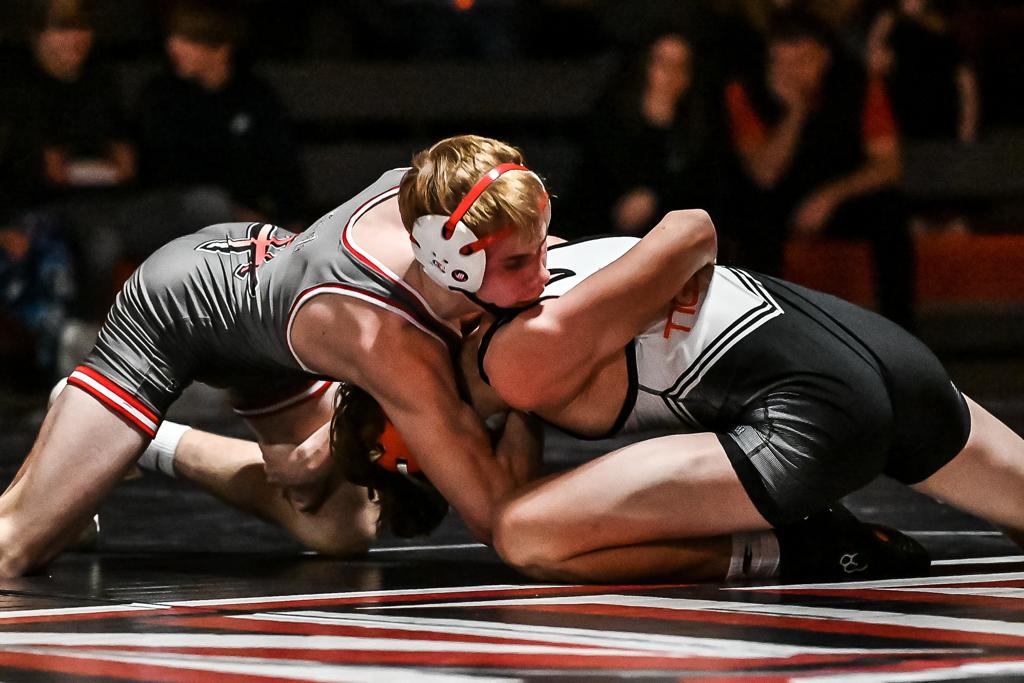 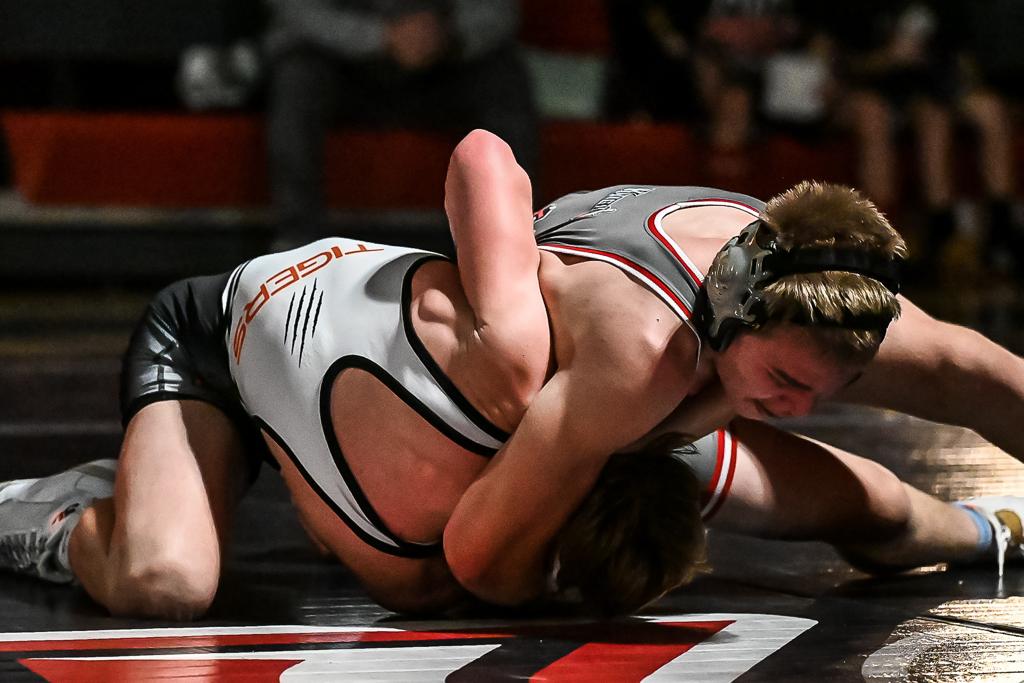 Wrestler of the Week Jeremy Blascyk vs Rose of MAHACA. PHOTO by TAMMIE OLSON PHOTOGRAPHY 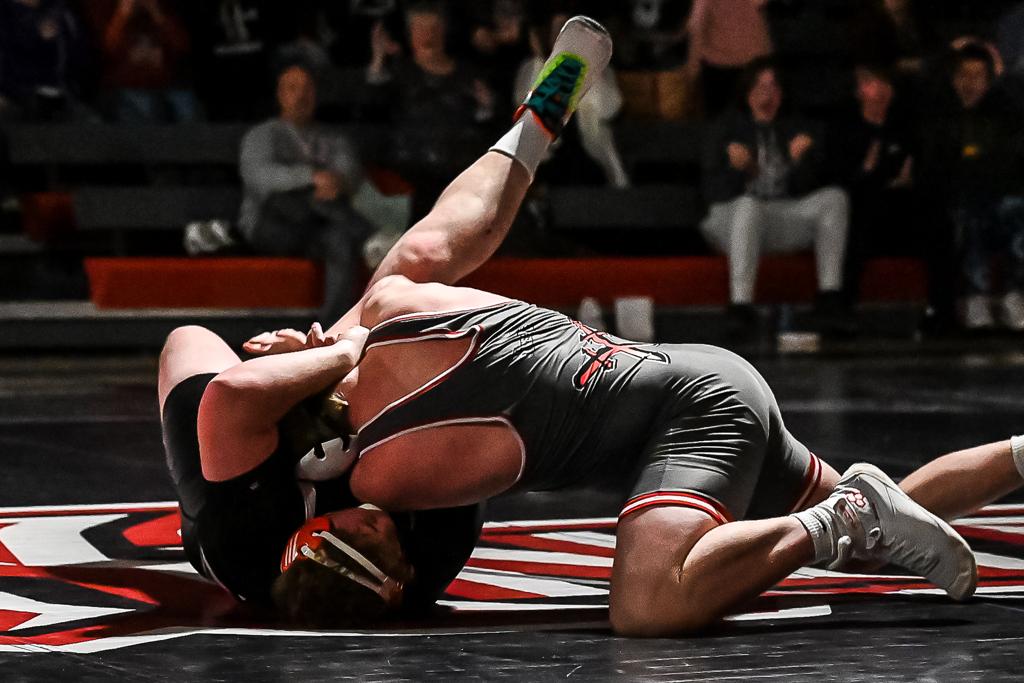 Will Rustan turns his MAHACA opponent for the win. PHOTO by TAMMIE OLSON PHOTOGRAPHY

Due to Morris schools closing for the day, Thursdays home dual was moved to Friday. Every able bodied wrestler in the Knight and Morris Area/Hancock/Chokio-Alberta lands showed up in Barrett. It was a super dual! For years there has been a rivalry brewing with the MAHACA Tigers and Friday gave the venue to pit both squads Elementary, JV and Varsity programs against each other. The match-ups were excellent all night and the teams provided nearly 4 hours of grappling action! It was also parents night, a good celebration for the entire program to get a match.

The varsity dual began with Owen Gruchow and Evan Dingwall receiving forfeits as MAHACA was unable to send out a wrestler at the two opening weights. 12-0 in favor of the Knights. The Tigers put a pair of pins together at 120 and 126 lbs which tied up the score at 12 each. Adam Lohse and Solomon Wales wrestled tough matches that ended in decisions bumping the Knights ahead by 6. MAHACA bounced back with a fall at 145 to tie it up again and the slug fest was on! Coach Rose from the Tigers is crafty at moving his lineup around for maximum points, he threw out a forfeit to Hunter Gruchow at 152 which once again gave the Knights the advantage 24-18. MAHACA put out a top ten wrestler with Jeremy Blascyk at 160 lbs and the result was one of the more exciting matches of the season. Blascyk battled hard with the upper class-man and when the match was done, Blascyk had held the Tigers horse to just a decision. A move that would play into the dual big time later on. MAHACA earned a decision at 170 lbs which drew the teams even for the third time in the dual. Anthony Sykora put his opponent to his back in the first period giving the home team 6 points. The Tigers took a decision at 195 lb and a major decision at 220. That 4 point major gave MAHACA their first lead of the evening. It would come down to heavyweight as the Tigers led the dual 31-30. Any outcome would win the dual, decision, major, tech or pin. Will Rustan took the mat for WCAABE, he faced off with Carter Gibson for MAHACA. A short time into the match Gibson tossed Rustan to his back, Rustan was able to roll through but found himself in a hole with a wrestler who was able to throw him. Once the two got onto the mat, Rustan's technique and conditioning overtook the big man from Morris. Rustan gained the fall 46 seconds into the second period to give his team the victory, 36-31.

About the week, Coach Brandon Gruchow stated, “Tuesday: I really appreciate Minnewaska going out of their way and letting us in on their event tonight. Unfortunately, it was just a dual, we were hoping to get a match against Paynesville as well. We wrestled okay tonight and it was obvious it was some of our wrestlers first time down in weight. We had some of our wrestlers do a great job and others did not have the match that we were expecting. I'm excited for the night that we stepped out on the mat and all 14 wrestlers can say they left it all out there.

Friday: I was really impressed with how the wrestlers were able to focus and keep the mental edge during tonight's events with all the extra going on with Elementary and parents night. It can be sometimes difficult to focus in on the task at hand when there is so much extra going on. I was also impressed with those that stepped in to help fill some weight classes and give us a chance to put the dual in our favor. We are getting closer to firing on all 14 cylinders!

‘Fastest Fall of the Week’ was earned again by Senior Anthony Sykora. Anthony’s 1st period pin in the MAHACA dual happened at 59 seconds. Sykora had another pin that happened on Tuesday. That second period fall earned Anthony the new school record with 108 wins by pin. Congratulations Anthony!

‘Wrestler of the Week’ goes to Sophomore Jeremy Blascyk. Blascyk is a second year varsity wrestler. He is the type of athlete that will do anything the team requires. When the season began, Jeremy weighed in at 185 lbs, the team needed a 170 lber so Jeremy moved off some weight and went there for his team. Recently, the team is now needing a solid 160 lber. Jeremy took it upon himself to trim down to 160 and fill the void. Jeremy is an incredibly dedicated worker for his squad. He goes to regular practice, as does everyone, and then drives to 1.5 to 2 hours of strength training and conditioning on top of that. Blascyk never misses his extra training and it has shown up in his bouts this year. Several times Jeremy has faced a wrestler with better technique and his brute force slows down the match and tires and/or frustrates his opponent. Blascyk uses that to do what is necessary for the Knights to better position themselves for the win. He is selfless in knowing that it is not always about the personal win, but staying safe...holding off a pin...which puts the Knights into position to ultimately win the dual. That exact example happened this week when he was able to not just hold off a top ten AA wrestler from a pin, but gave his opponent a serious run for his money in the match. Jeremy is also a mouthpiece for his team. He is positive and no matter what team he is on, he is cheering and yelling for his teammates.

The 13-3 Knights will go back on the road this week. On Tuesday, the teams heads South to Olivia to face off with the 7-10 Wabasso Rabbits, Minneota, and the 0-15 Bold Warriors. Friday, the Knights head North to Detroit Lakes where they face off with the 3-3 AA Lakers and the 11-3 Crookston Pirates.