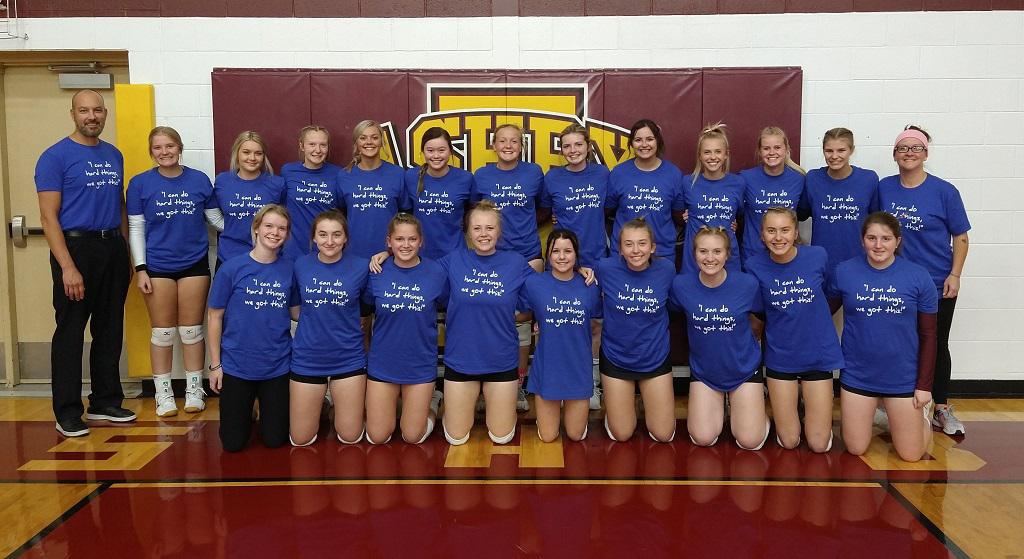 “Our match in Ashby was a match full of errors,” commented Brandon-Evansville Head Coach Kelly Olson.  “We missed serves at the wrong time, or made too many easy serves, setting Ashby up for easy offense.  We found ourselves waiting for something to happen instead of making things go.  We were plagued by errors hitting the ball, errors passing both simple free balls and in serve receive, and were standing up too often to play good defense,  Our setter is tired from running around the court tracking down every errant pass in order to set a ball  only to see someone not ready to hit, or see the attackers hit the ball out.  We hit at a .093%, passed at a 1.48 out of 3 in serve receive, and made 57 unforced errors.  We handed Ashby 77% of their points.  On the other side they made 53 errors and gave us nearly 60% of our points.  We have a lot of things to work on in the next 15 days to get ready for playoffs. The team will have to find their focus and sharpen things up or it is going to be a very short playoff run.  I did think Ashby kept a lot of pressure on us with 55 digs in the four sets.  That team chased balls down and dug and scratched and clawed for every play of the match.  They outworked us, which tells me if a few balls go their way instead of ours, the scores could just as easily been flipped.  We were lucky to get out of there with a win.”

“Growth seems to be a continual thing with this group of athletes this year,” stated Ashby Head Coach Hayley Stevens. “Each night there are great things happening.  Individually and as a group they are improving and picking up skills we are working on each practice night. A few crucial missed serves caught us in the first set and our togetherness was tough to grab back in the fourth. We got out on the court tonight ready to play after a tough loss with Hillcrest Saturday where our setter was injured in the first set. We were happy to have Catherine Koefod back tonight but then made more adjustments in the rotation since we were missing another starter out from an injury. Ryleigh stepped up Saturday and filled in when Catherine went out and tonight Kyra Aamot really stepped up and after having only played front row in one game so far she made the adjustment from libero to outside hitter to fill the gap. Stepping up and being a team player is becoming our motto this year and I couldn't be prouder for their flexibility and commitment when things are happening that are out of our control.”

“We also collected $305 to be donated to the local cancer center between the second and third sets,” reported Coach Stevens, “and also rallied for our fellow LEC Coach John Reber of Rothsay, wearing our blue shirts.”