he Fergus Falls girls hockey team completed its 2018-19 season on a winning note with a 4-2 victory over Rochester Lourdes/Dover-Eyota in the Class A consolation final of the girls hockey state tournament on Saturday at TRIA Rink at Treasure Island Center. 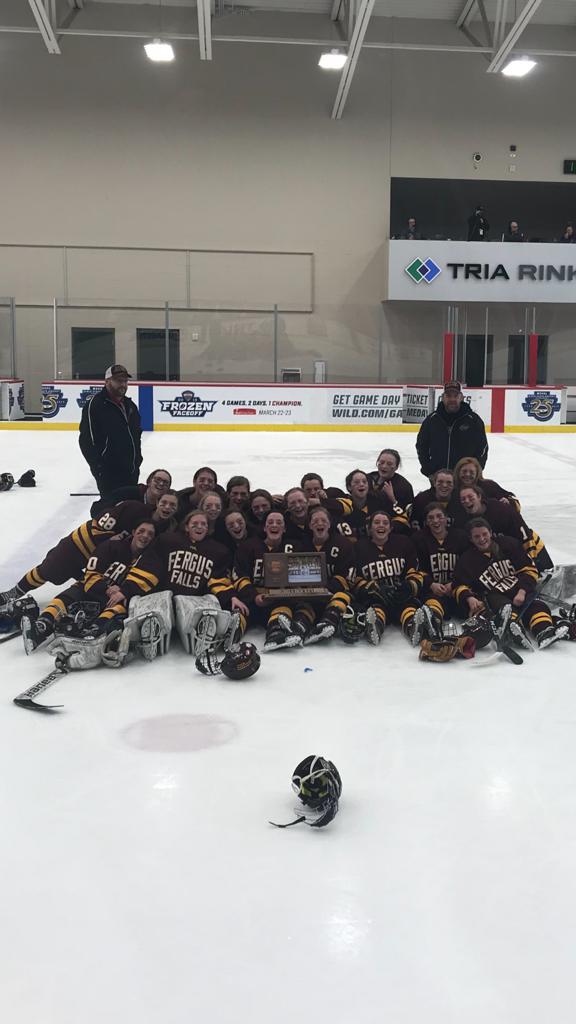 The Otters fell behind 1-0 after one period, but eighth-grader Maddie Hulter scored the tying goal just 46 seconds into the second period with assists from Jade Zierden and Gabby Brimhall.

Junior forward Jade Zierden scored two goals in a three-goal spree that spurred the Otters (23-7-0) from a one-goal deficit to a two-goal victory.  Zierden’s first goal was assisted by Sophie Rausch and Ellie Andersen and her second goal was setup by Rausch on the power play with just 18 seconds left in the second period.

Senior defender Hallie Sheridan capped the outburst with a blast from the right blueline, a shot that hit the crossbar and bounced in at 15:17 of the third period. The goal, which was assisted by Vivian Karsnia,  came moments after the Otters had killed off a penalty.

Senior defenseman Hallie Sheridan and junior forward Jade Zierden were named to the Class A All-Tournament team.
Zierden also tied a Class A State Girls Hockey Tournament record with her 5 assists in the Otters 7-1 win over Mankato East/Loyola in the consolations semifinals on Thursday.