The 10U B Maroon Girls traveled to St. Michael-Albertville this past weekend and competed in a 12 team tournament, finishing as runners-up. 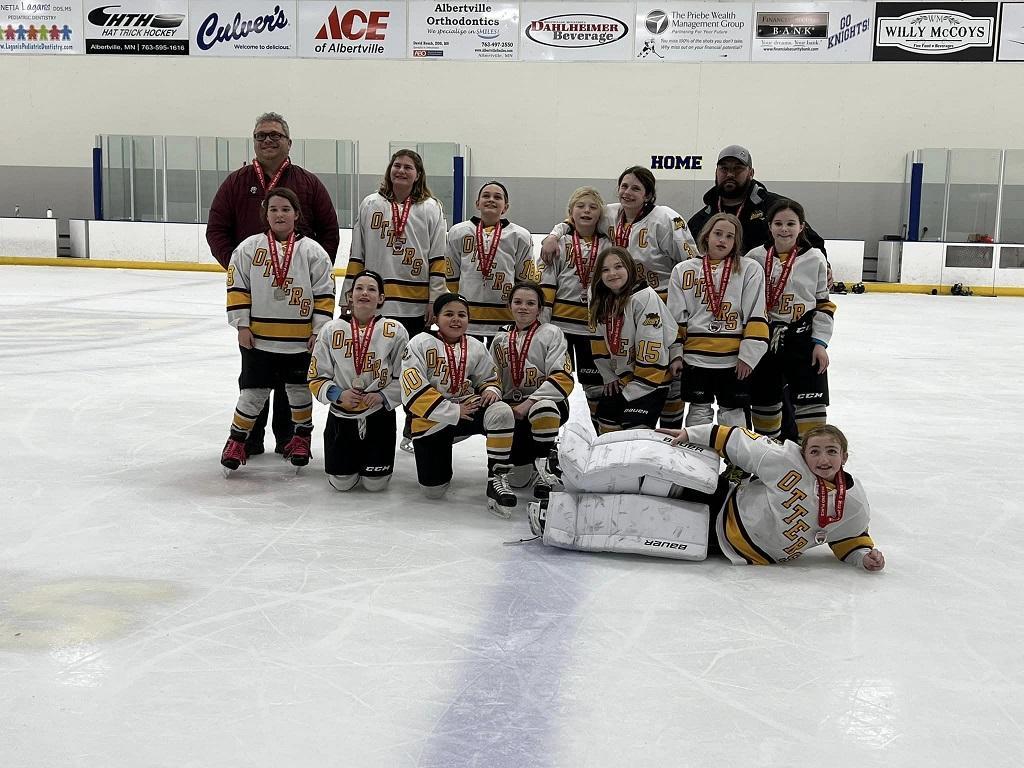 Game one of the tournament took place on Friday evening against the Southside Valkyries. The Otters came out firing on all cylinders as they sent a message to the rest of the teams in the tournament walking away with a convincing 12-0 victory. Maura Fransen got the scoring started for the Otters and it was contagious after that. Fransen was assisted by Addyson Wolden. Leading 1-0, Yanah Ness doubled the lead as Kinzley Krein assisted. Krein assisted again on the very next goal as Avery Polzin found the back of the net. Leading 3–0 in the first period, the Otters weren’t done yet. They would put three more goals up before the end of the period. Those goals came off the sticks of; Wolden, (assisted by Piper Soliah), Hannah Johnson (assisted by Polzin) and Soliah (assisted by Fransen). Period two was much the same. Lizzie Jyrkas scored her first goal of the year in the beginning of the second period, as she was assisted by Fransen. Johnson scored the eighth goal of the game, unassisted. Soliah scored her second goal of the game as she was assisted by Alison Moore. With a 9-0 lead, Kylee Eggen would stretch the lead to 10 as she scored unassisted. One minute later Soliah got the hat trick as she put the Otters up 11–0. The final goal of the game came from Jyrkas as she was assisted by Ness and Soliah. In front of the net, Norah Bohannon, received her second shutout of the season.

Game two of the tournament was on Saturday against Champlin/Coon Rapids. Polzin scored early in the first, assisted by Soliah, giving the Otters a 1-0 lead. Soliah and Krein would score the next two goals for the Otters unassisted. Now leading 3-0 Moore extends the lead to four as she is assisted by Fransen. Bohannon pads to the lead as she is assisted by Moore and Fransen. With Bohannon scoring, now all members of the team have at least one goal on the season! Moore gets another assist as Fransen puts one past the goalie. Period number two ends with a goal from Ness, assisted by Krein. Leading 7-0 The Otters scored twice more. Fransen scored both of the goals and was assisted on both by Soliah.

The next round of the tournament took place against a competitive NWC Riverhawks-Red team. It was all Otters in period number one as Fransen recorded a hat trick in the first twelve minutes of play. Two of her goals were unassisted and one was helped out by Soliah. Leading 3-0 after one, the Riverhawks answered right back. They scored three consecutive goals in the second period to tie it up at 3-3. The go-ahead goal came from Johnson as she was assisted by Fransen. The Otters took a 4-3 lead entering the final period of play. The third period was a stalemate as neither team could score. The Otters were victorious and started out the weekend with three straight wins. Quinn Proffit was goalie for games two and three and only let an impressive four total goals in.

Game four did not get any easier for the Otters as they now faced a tough Forest Lake team. The Otters only put up three goals all game, again all off the stick of Fransen, with one assisted from Johnson. However, three goals is all they needed to win the game. Forest Lake scored two goals in the third period to put the pressure on the Otters, but the Otters fought hard and squeaked out a narrow victory of 3-2.

The Otters battled their way to the championship game on Sunday against an extremely difficult Osseo Maple Grove team. Maple Grove came on the ice ready to play. They scored the first eight goals of the game. Trailing 8-0 in the third period, The Otters got on the board as Soliah scored unassisted. The Otters did get one more goal in the final seconds of the game off the stick of Krein as she was assisted by Soliah.

The 10U B Maroon girls had an excellent tournament and came home with second place medals. They now improve to 18-5 on the year and will play Alexandria Black this Friday at home.