Barnesville opened the tournament with a 13-4 win over Detroit Lakes on Friday, followed by a 3-0 shutout against Pelican Rapids.  Barnesville matched up with DGF Black in the semis and hung on for a 12-10 win, while DGF Black would drop down into the elimination bracket and defeat Pelican to advance to the championship.  With a state tournament bid already secured by finishing in the top 2 teams in the tourney, Barnesville looked to close out DGF on Sunday.  DGF Black, playing as the visitors on their home field, would rally back from a 6-1 deficit to hand Barnesville their first loss and force a second game in the double elimination tourney. 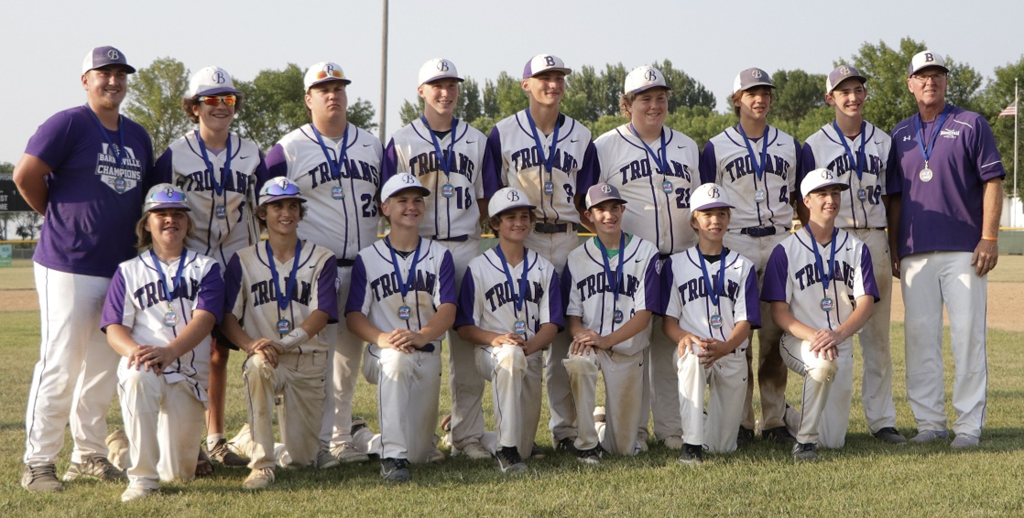 Barnesville’s 15U Babe Ruth baseball team opened up at the district tournament playing winless Detroit Lakes and cruised to an easy win.  After giving up 2 runs in the opening inning, Barnesville countered with 11 runs in the first two innings to blow open the game.

In a game played just 11 days earlier, Barnesville would match the same results with Andrew Ehlert spinning another 1 hitter and Barnesville winning by the same 3-0 scored.  Ehlert lowered his already miniscule ERA to less than 0.600 as he went 6.2 innings and struck out 8 Pelican batters with a mix of fastballs and curves.  Tschumperlin earned the Save with a 1 pitch for the final out.  Barnesville’s 8 hit attack was led by Ethan Larson (2-3; 1 R) and Peyton Amundson (2-4), while Bolgrean, Brady Nosal and Morey each had an RBI.

Barnesville jumped out to a 6-1 lead after 2 innings but couldn’t make it hold up, as DGF Black, advancing thru the elimination bracket, would claw back and score 4 runs in the sixth and 3 more in the seventh to force a second championship game.  DGF Black pounded out 16 hits and were also aided by 7 walks issued by Barnesville pitchers.

With each team having lost once to each other, a second 5 inning championship game would decide the title and a top seed in next week’s 15U State Tournament.  With Barnesville leading 3-0, DGF would score 5 runs in the 3rd behind 5 walks, a hit batsman and 2 hits.  Barnesville would rally however, as a one out Morey opposite field double and a Tschumperlin bullet to the deepest park of the park yielded a triple and closed the lead to one.  After a strike out, Ehlert lined another triple over the center fielder’s head to tie the game at 5.  Bolgrean and Tschumperlin would retire the Black squad in order to send the game to extra innings.  Amundson lifted a two strike double to right center and Larson followed with a bloop single, with Amundson scoring on an error.  Morey was intentionally walked and Tschumperlin promptly rifled a single to load the bases.  Maesse would walk to plate another run before Brady Nosal dropped a line drive into left to score Tschumperlin.  A Balk would score the final run before Nosal retired the side in order in the bottom of the inning to secure the championship.

Barnesville 15U advances to the State Tournament this Thursday thru Sunday (July 22-25) in Henning and Battle Lake.  Games and brackets were announced on Tuesday and info can be found on the Barnesville Trojan Baseball Facebook page.