The Fergus Falls Otter 14U team competed in district tournament play this weekend and came away with a 2nd place finish. The games were played in Evansville.

The Otters opened the tournament on Thursday with a pair of wins. They won the first game 16-2 over Wheaton. The Otters scored two in the first and two more in the second for a quick 4-0 lead. The Otters blew the game open in the third scoring 8 runs for a 12-0 lead. Carston Fronning was in complete control on the mound allowing only three hits and needing only 40 pitches in four innings of work. Wheaton scored a pair of runs in the top of the fourth, but the Otters answered with four of their own to make the score 16-2. Logan Larson pitched a scoreless top of the fifth and the Otters won the game 16-2 in five innings.

Fronning and Brock Scheuerman each had two runs batted in and Levi King scored four runs to lead the offense. Fronning picked up the win with his four innings of work on the mound. 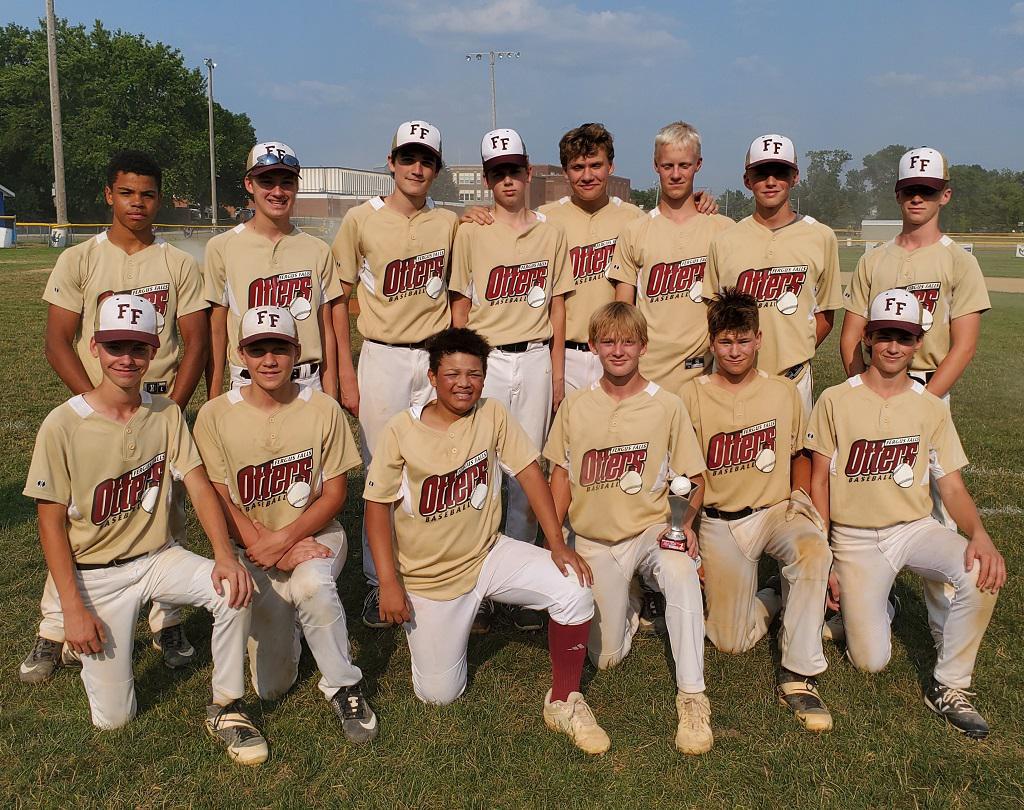 Game two was an intense and exciting game as the Otters took on the Prairie Ridge Baseball Association Blue (PRBA) team and had to battle back from a 6-1 deficit to win the game 11-6. The Otters were not on top of their game early as base running and defensive mistakes led to that 6-1 deficit. Henry Bethel started the game for the Otters and gave up a pair of first inning runs for an early 2-0 PRBA lead. The Otters picked up a run in the second to make the score 2-1 but PRBA took advantage of a walk and a couple of Otter errors and had a bases loaded double to make the score 6-1.

The Otters began to chip away at the lead in the bottom of the third. Levi King stroked a one out single, stole second and came around to score on a Fronning base hit. Fronning stole second and was able to score on a wild pitch to cut the score to 6-3. Bethel really settled in after the third inning and pitched a great fourth and fifth innings to give the Otters a chance. Trailing 6-3 heading into the bottom of the fifth, the Otters went to work. They were able to take advantage of some walks and wild pitches, picked up RBI’s from Scheuerman and Jack Ratz and by the time the inning was over the Otters had an 8-6 lead.

Bethel had reached his pitch count level, so the Otters turned to King on the mound. Good pitching and some nice defensive plays set PRBA down in order in the top of the sixth and got the Otters back to the dugout to swing the bats needing to add to their 8-6 lead.

In the bottom of the sixth, the most impressive play of the game was in one at bat by Fronning on a ground ball to the shortstop. It really showcased great hustle and baserunning by the Otters. Larson and King walked to put runners on first and second. Fronning hit a ground ball to short that the PRBA shortstop wanted to go to second with to force King, but a great jump by King prevented that. The shortstop hesitated and went to first to get Fronning but his hustle beat the throw, so he was safe at first. Meanwhile, Larson who was at second base, just kept running on the play and was able to beat the throw home and score. King saw the throw home and advanced to third.  So, on a ground ball to the shortstop, the Otters were able score a runner from second, move a runner from first to third and have a runner on first. Fronning then immediately stole second to put runners on second and third for Bethel and he delivered, scorching a two run double to right to score two and give the Otters an 11-6 lead.

King was perfect in the top of the seventh getting two infield popups and the game ended with catcher Scheuerman making an outstanding catch of a foul ball.

Fronning, Bethel and Ratz each had two runs batted in. King reached base all four times with two hits and two walks and stole three bases and scored three runs. For the first two games of the tournament, King came to the plate seven times and scored seven runs. Bethel picked up an impressive win on the mound with King getting the save.

The two wins kept the Otters in the winner’s bracket, setting them up for a Friday evening game against top seeded Parkers Prairie. The two teams gave the spectators 9 innings of tremendous, high energy baseball, hustling in and out of the dugouts between innings, making great defensive plays and both teams receiving outstanding pitching. Parkers Prairie won the game 2-1 with a walk-off single in the bottom of the ninth inning.

Carston Fronning started on the mound for the Otters and he was on top of his game against a very talented and hard- hitting Parkers Prairie team. He set the Panthers down in order in the first two innings, but the Panthers scored a single run in the bottom of the third for a 1-0 lead.

The Otters answered in the top of the fourth. Bethel drew a walk to open the inning, stole second and scored on a clutch, two out single by Jack Ratz to tie the game 1-1. The defensive play of the game came in the bottom of the fourth inning with the Panthers at the plate. With two outs and a runner at first base, the Panther hitter drilled a ball that found the fence in left center field. Otter left fielder Luke Pearson hustled after the ball, made a great throw to his cutoff man Bethel and Bethel made an on target throw to catcher Scheuerman to nail the runner trying to score from first base and keep the score tied 1-1.

The score remained tied 1-1 from the 5th inning until the bottom of the 9th due to great pitching an error free baseball.

The Otters did have some late opportunities as they had two runners on in the top of the 8th inning, and a chance to break the tie. Logan Larson singled and Lucas Hansen had a great at bat and drew a walk. That brought up the top of the order and with two outs, King hit a ball hard to center but it was caught for the final out the inning.

Fronning pitched a tremendous 7 innings before giving way to King in the bottom of the 8th inning. Levi set the Panthers down in order in the bottom of the 8th inning giving the Otters a chance to break the tie. Fronning was hit by a pitch and Bethel walked to put runners on first and second with nobody out but the Otters were unable to move them around and the game remained tied 1-1.

Parkers Prairie opened the bottom of the 9th inning with a single that snuck through the right side of the infield, executed a sacrifice bunt to move the runner to second base with one out. King got the next batter to popup to Bethel at short for out number two but the next Panther hitter hit a hard ground ball that got through the left side of the infield scoring the runner from second for a 2-1 Panther win.

The loss moved the Otters into the Saturday elimination game against OTC. The Otters were a little slow to get going and fell behind 3-0 in the top of the first. They got one back on a single and stolen base by King and an RBI single by Scheuerman. OTC extended their lead to 5-1 before the Otters finally found some energy and scored some runs. Klinnert, Hansen and King walked to load the bases and base hits by Fronning and Scheuerman plated three runs to make the score 5-4 OTC.

Logan Larson came in to pitch in the third inning in relief of starting pitcher King and did a great job of keeping the Otters in the ball game. The Otters tied the score 5-5 with a run in the bottom of the sixth. OTC took the lead back with a run of their own in the top of the seventh to take a 6-5 lead.

The Otters were able to win in walk-off fashion as Fronning reached on an error and advanced to third on a Bethel single.  Jack Ratz delivered an RBI single to tie the game 6-6 and Alex Ellison drove a ball through the right side of the infield for the game winner and giving the Otters 7-6 win.

Logan Larson picked up the win in relief. Leading the offense was Scheuerman with two runs batted in and Jack Ratz had a nice game at the plate reaching base three times with an RBI. King scored two more runs and Alex Ellison delivered the game winning RBI single.

That win put the Otter back up against Parkers Prairie, who was still undefeated in the tournament. This time they were just too much for the Otters, winning the game 14-1 and claiming the district tournament championship.