The West Central Area/Ashby/Brandon-Evansville (WCA/A/B-E) wrestling program has completed its fifth week of competition. During that time frame the team has maneuvered the field quite well, posting a record that includes 17 wins and just three losses. Those results kept the Knights looking strong and has provided a top 20 ranking all season. As stated, week five is now closed and it produced another four team victories. One in particular was a bit more special than most.

Tuesday, February 16th the team traveled to Wheaton for a triangular against the section 3A Canby Lancers and fellow section 6A Border West Buccaneers. An onslaught of Knight wins with bonus points overpowered both teams and provided lopsided victories by margins over 30 points. 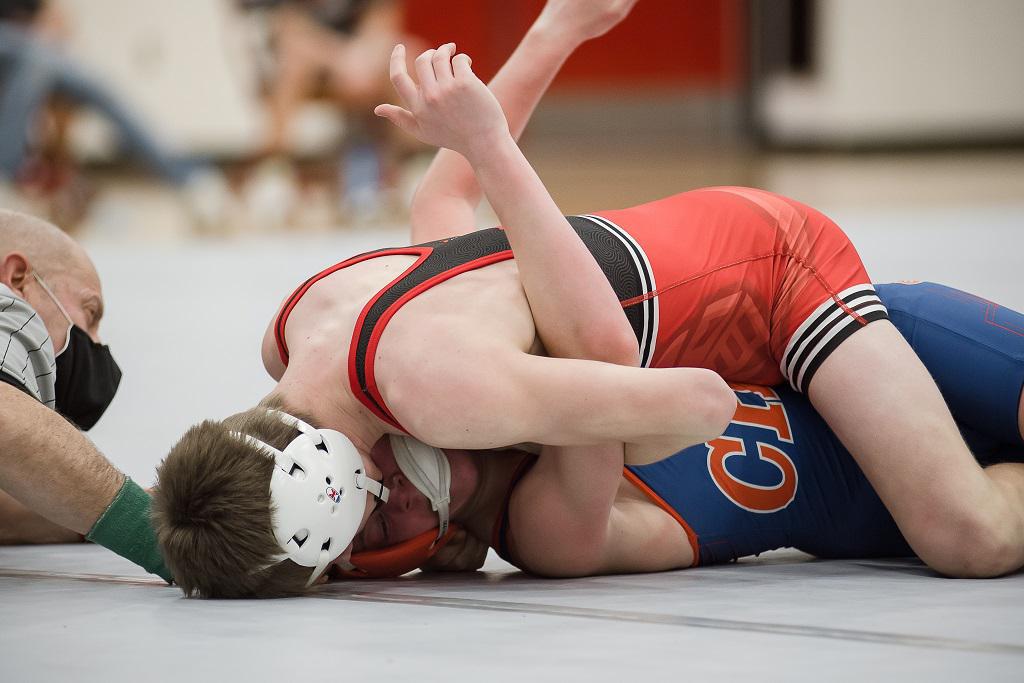 First up were the formidable Lakers. As with most top five ranked teams, Minnewaska is loaded with talent and has very few (if any) holes to capitalize on. It would take all the offense and defense the Knights can muster plus a little good fortune to topple a team like the Lakers.

The dual began with the Knights surrendering eight points right away, giving up a decision and a pin. At 120 lb Adam Lohse put WCA/A/B-E on the board with a first period fall. He was backed up in his effort from Solomon Wales who wrestled his way to a decision at 126 lb. This found the score tied up at nine points apiece. Minnewaska added another nine as they took the next pair of bouts by a fall and a decision.

Knight grappler Reubens Swanson was in clear control of his match at 145 lb when his opponent was forced to surrender with an injury default. This gave the home team six points and opened the door for Jordan Lohse to tie it up again at 18 all with a decision. Anthony Sykora provided the Knights the lead by five as he dominated another opponent, this time by a tech fall. The Lakers were not exactly conceding the dual as they posted a pair of back to back decisions and regained the favor of the score by a point. With three matches to go WCA/A/B-E was down 24-23.

Beau Robinson took the mat at 195 lb and dumped his opponent for a pin near the end of the first period. Following Robinson’s pin, the scenario was as such...the score was 29-24 Knights. The Lakers had a former ranked wrestler at 220 and the current #2 ranked heavyweight. A tough pair of competitors. Colton Lindquist stepped out for the Knights and wrestled his way to an overtime decision. Those three team points provided a score of 32-24 and secured the Knights the upset. The Lakers took the last match by pin fall but were sent home with a team loss.

The final match up of the evening featured the Knights vs the Tigers. MAHACA has a very solid lineup in their lower weights and after 138 lb led the dual 21-12, but the Knights provided too much muscle up top and went on a 45 point scoring binge. The match ended with a Knights win of 57-21.

Head Coach of the Knights Brandon Gruchow summed up the night with,”The team wrestling mentality is starting to shine and these guys pulled off two great wins tonight because of it. We’re doing a better job fighting for position on bottom and we will need to continue to improve to keep beating the solid teams we have in front of us.” 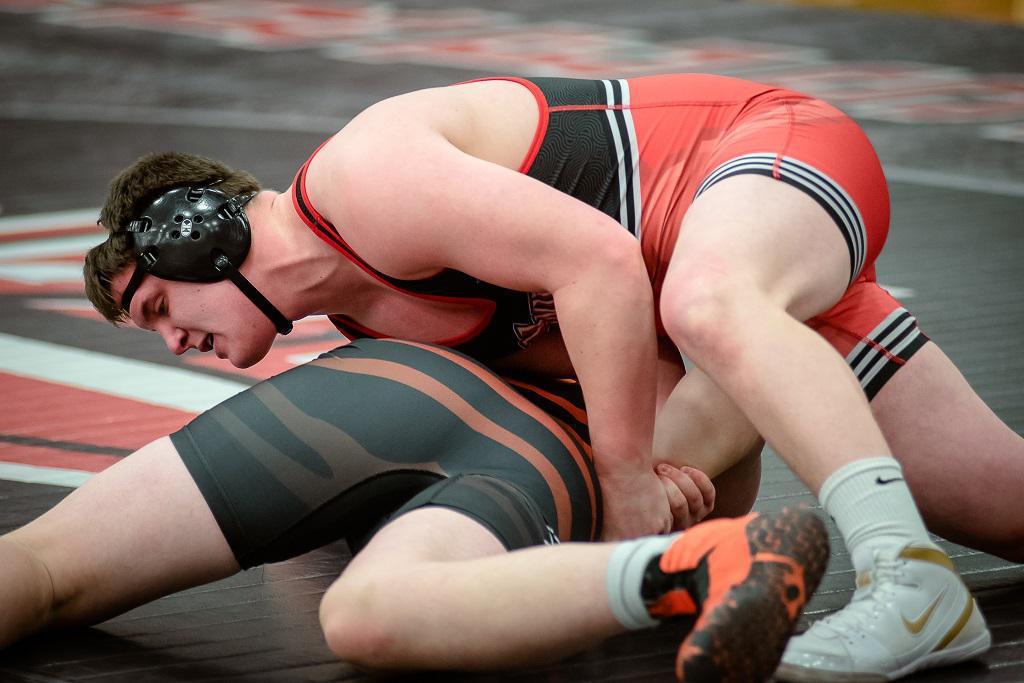 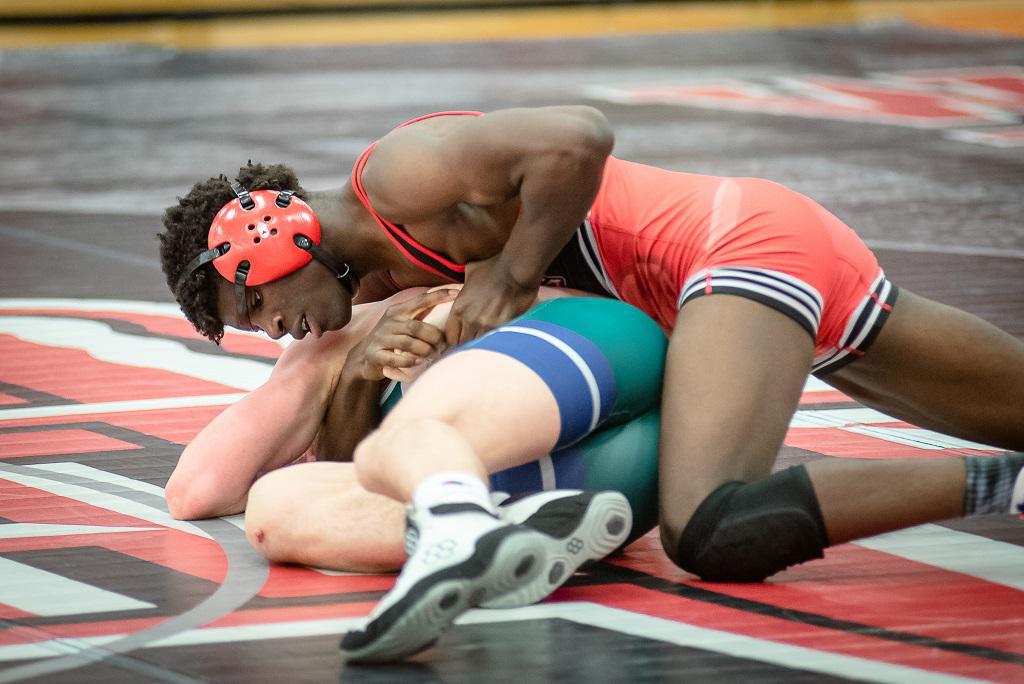 The Knights went 4-0 this week. The obvious reason for four wins is because they outscored their competition 199-92. When looking deeper into the wins and losses the team came out on top of 37 of the 56 matches wrestled. That is a 66% win margin. It is not just that the Knights usually win more matches than the opponents, it is how the matches are won that keeps stacking up the lopsided margins. WCA/A/B-E is a team that thrives on bonus points. Out of the 37 wins in the past week 84% of those (31) included bonus points of some kind. The staggering number that stands out is 20 of the 37 bouts were won by pin fall. That meant the Knights gained a pin 54% of the time that they stepped onto a mat, that is a rate of more than every other Knight put his mans shoulders to the mat. That is good wrestling!

Wrestler of the Week
This week five Knight grapplers went 4-0. That makes choosing a standout difficult. Reubens Swanson, Jordan Lohse, Anthony Sykora and Colton Lindquist all four remained undefeated this week however, the nod goes to Freshman 120 lber Adam Lohse. Adam was instrumental in starting his teams scoring in three out of the four duals wrestled. Getting the team on the board is the first part of winning anything as we all know we cannot run before we walk. Adam did not just win his four matches, he gained 23 out of the possible 24 points available as he posted three pins and a technical fall.

The 17-3 Knights enter week six with another set of triangulars. Tuesday, the 23rd they host the 1-18 section 5A Silverstreaks from Osakis and the 1-17 Fergus Falls Otters from section 8AA. Thursday the team travels to Pelican Rapids for a dual with the hometown 4-13 Vikings from section 6A and the #1 ranked 20-0 section 5A Long Prairie-Grey Eagle/Browerville Wolves.