Dague to Play Basketball for NDSU

Henning senior Ellie Dague has signed a National Letter of Intent to attend NDSU and play basketball for the Bison.  Dague was a Class 1A All-State selection as a junior and has scored over 1,800 career points for the Hornets.  She averaged 20.7 points per game and 5.3 rebounds per game during her junior season. 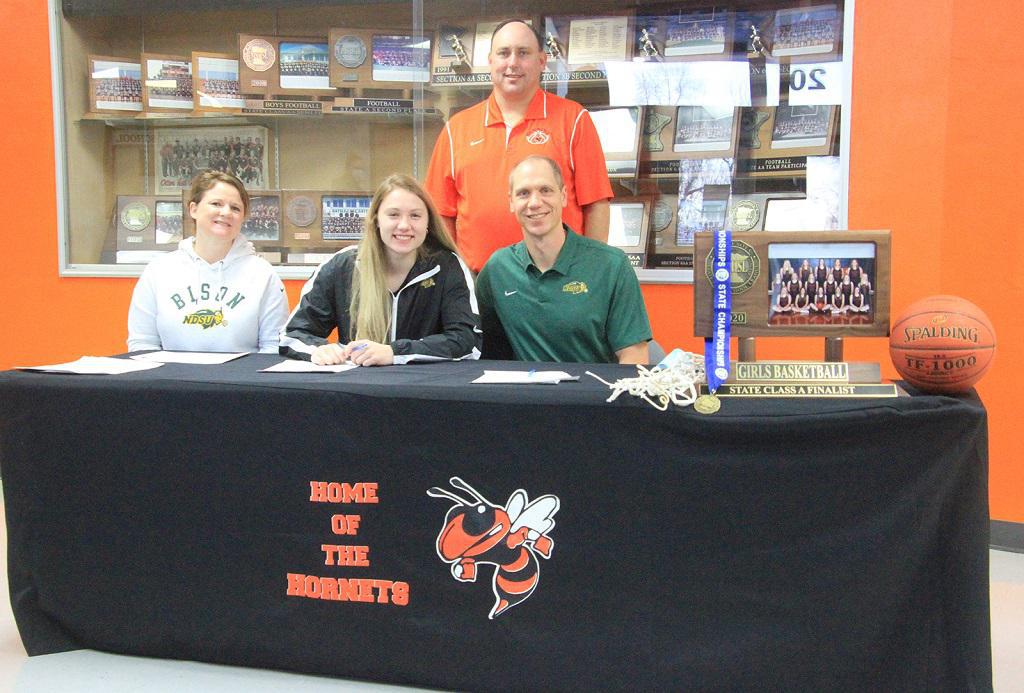 “The main reasons I decided to go to NDSU was that I really enjoyed the coaching staff and the culture around NDSU sports programs,” said Dague.  “I think that I knew college basketball would be a part of my future my eighth grade/going into my freshman year AAU season.  I had a lot of success that year and started getting my first D1 letters from all over the country.  Last year during the middle of basketball season was when Morgan Paige (Assistant Coach/Recruiting Coordinator) and Jory Collins (Head Coach) formally contacted me.”

Dague led the Hornet girls to their first state tournament appearance in the history of the program last year, but after a quarterfinal round victory, the tournament was cancelled due to the Coronavirus pandemic.  Dague competed in AAU basketball during the summer, improving her game and preparing for the upcoming season.

“After the way our first state tournament appearance ended, we were all super hungry to get back and see if we can have the same success this year, if not better,” noted Dague.  “One part of my game that I improved on this off season was the defensive aspect of my game.  I had a great AAU coach this pas summer that emphasized defense.”

"Exciting day for Ellie Dague, her family and the Henning Hornet Girls Basketball program and school as she signs her NLI for NDSU Women's Basketball,” commented Henning Head Girls Basketball Coach Mike Hepola.  “Very proud of Ellie and looking forward to cheering her and the Bison on in the future and coaching her and her teammates during this upcoming season."

Dague has had a lot of positive input and support along the way.  “The most influential people I’ve had in my basketball journey have been my parents, Coach Hepola and my physical therapist, Brandon Strouth.  All of these people have pushed me to become the basketball player I am today.  My dad has always been there to help me pursue my goal of playing Division 1 basketball.  Coach Hepola has always believed in me ever since I was young as he pulled me up from seventh grade to play varsity for him.  Brandon Strouth was my PT through my ACL surgery and knee scope.  He was the one that helped me through all my mental challenges I faced through my recovery.”

"Ellie Dague is a big-time guard," said Coach Collins. "She has the ability to score at a high level, she's a tremendous passer, excellent defender and is super competitive. Ellie has very good size and strength for a point guard at 5-10. Her feel for the game and ability to make others better is probably her best attribute. I love the fact that she's from 90 minutes away and will get play in front of her family her whole career. I'm very confident Ellie will make an immediate and lasting impact on North Dakota State women's basketball."