Barnesville’s Senior Babe Ruth team defeated Ashby 8-1 on Saturday afternoon to win the MN Lakes Region tournament title.  Barnesville downed rival DGF 3-1 in the semifinal round earlier in the day, after beating Pillager (10-0) and Breckenridge (6-4) in the opening and quarterfinal rounds on Thursday and Friday.  The 12 team tournament was held in Pelican Rapids. 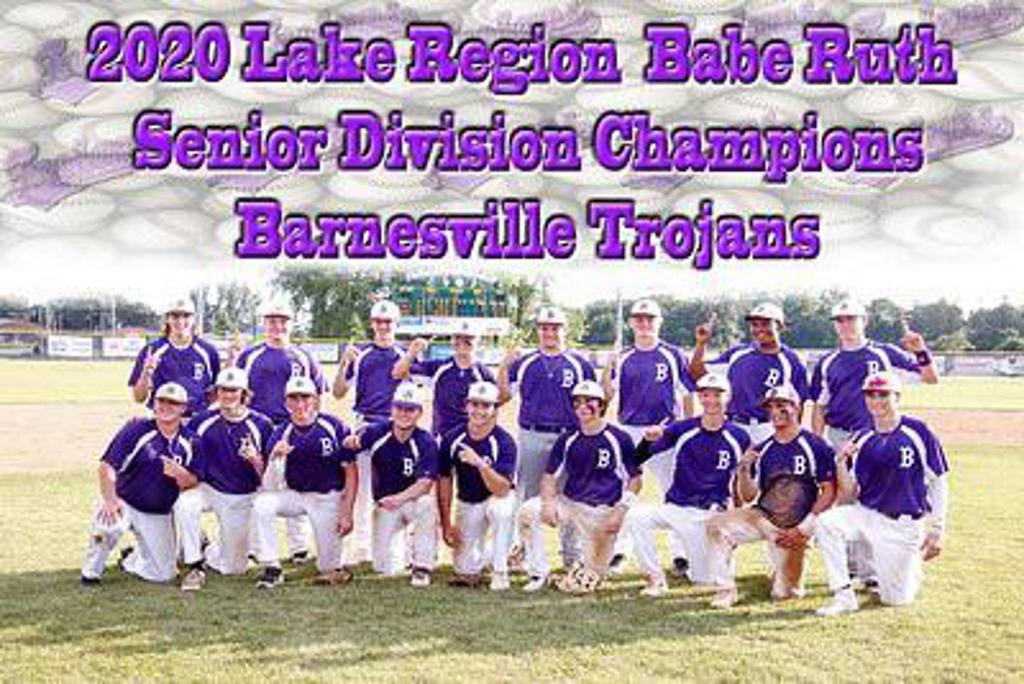 Saturday, Aug. 8 – Barnesville 3 DGF 1
Barnesville got another stellar pitching performance out of Sam Askegaard (6 inn, 2 H, 1 R, 2 BB, 3 K) and Caleb Ott (1 Inn, 1 H, 1 K) as they combined to shut down DGF bats, allowing just 3 hits and 1 run in the semifinal game.  Matt Samuelson (2-2, 2 2B, 2 RBI, 1 BB) provided the scoring punch with two RBI doubles to the outfield gaps in the first and third inning.  Jackson Wahl added an insurance run in the sixth with an infield hit, a stolen base and showed his hustle as he advanced to third on an error on the throw to second base.   Adrian O’Brien slapped a two strike ground ball to the right side of the infield to score Wahl to make it 3-1.  DGF mounted rallies in the final two innings, but a slick double play from Askegaard to Adam Tonsfeldt to Ott shut down the sixth inning.    In the final inning with runners on second and third with one out, Ott entered the game and responded by striking out DGF’s number three batter and induced a grounder to Tonsfeldt at short.  Askegaard, who had moved to first in the pitching change, deftly picked the throw out of the dirt to seal the win and advance Barnesville to the championship game.

Barnesville ended the summer with an overall record of 16-6-1.  Coach Phil Trowbridge commented that “the tournament championship was extremely satisfying, especially for our senior group that have stuck together and played a lot of baseball together since their Little League years.  Winning 4 games in 3 days against really good teams is difficult, but these guys wanted it more than their opponents.  To defeat the 2nd, 3rd and 4th seeded teams says something about the fight this team had.  They picked each other up when they needed to and delivered when they had to.  It was a fun summer of baseball and we’re blessed that we were able to play.”