The past weekend brought the best of the best the state of Minnesota has to offer together for the pinnacle of what wrestling has to offer. The Minnesota State High School League Wrestling Tournament.

The state tournament is held at the Xcel Energy Center in St. Paul. It features all three levels of competition all together in one building at the same time. Exactly 1,497 matches were spread over three days and in the end each class had a team and its individual champions. 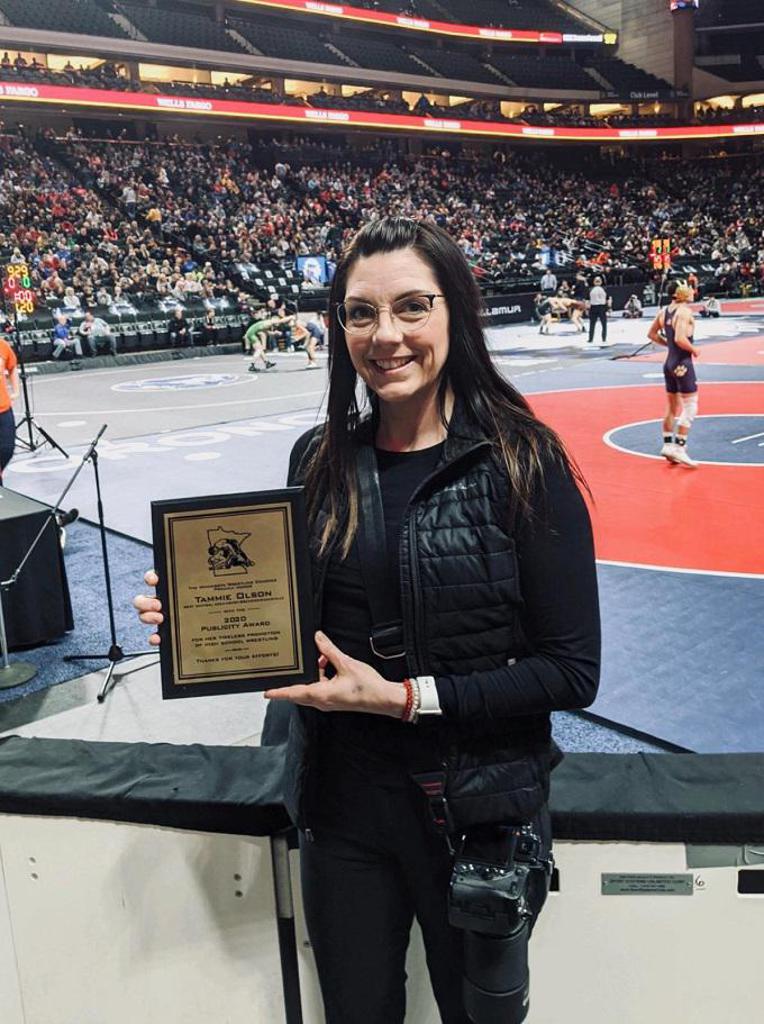 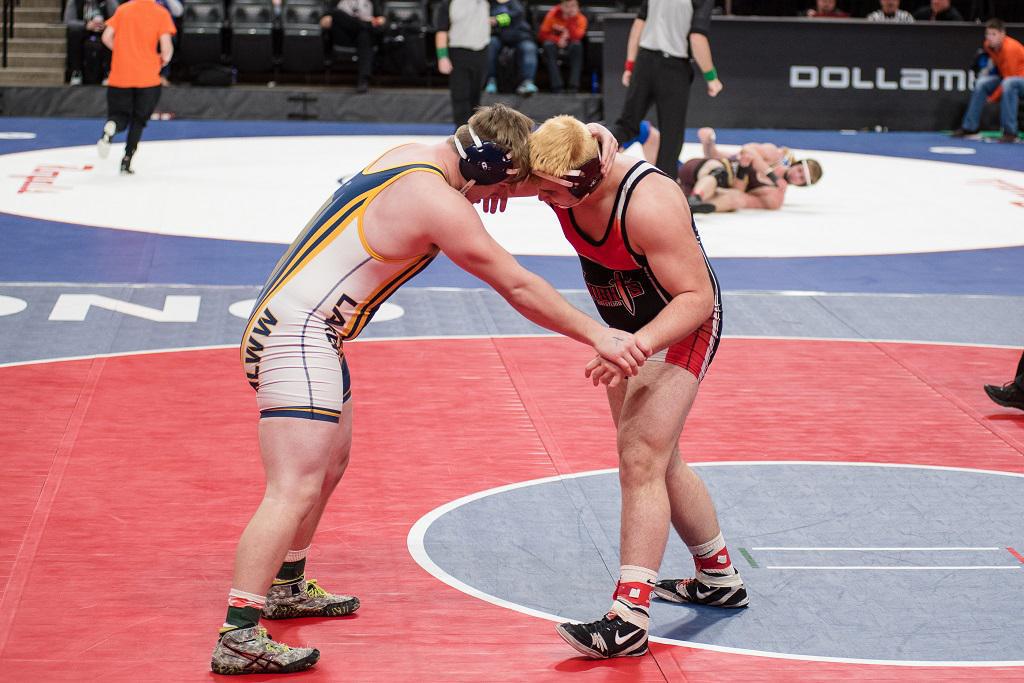 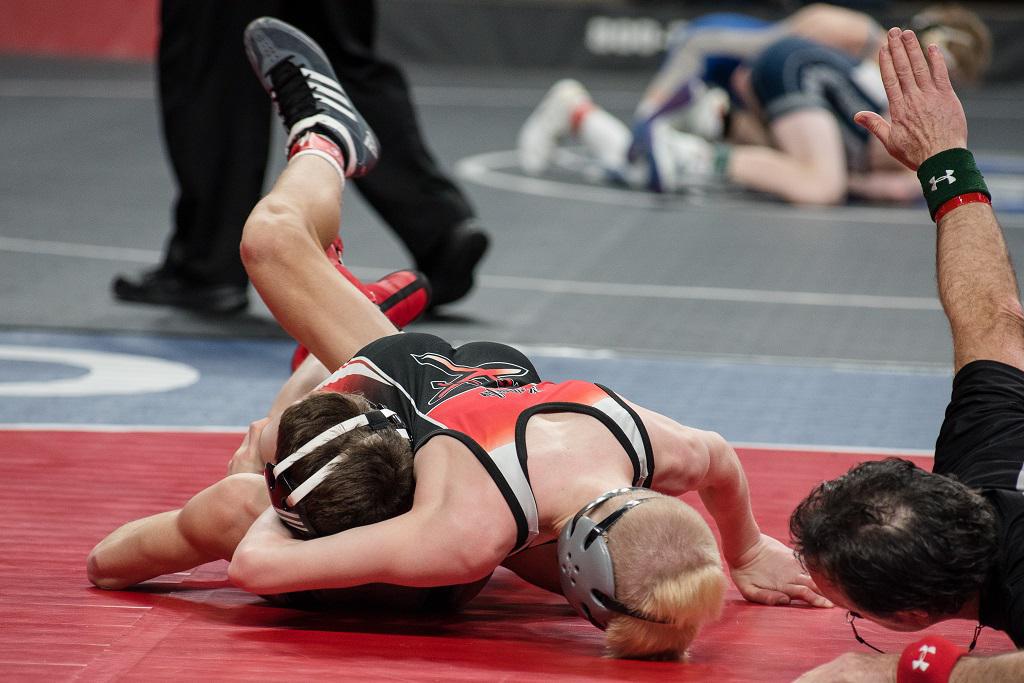 The West Central Area/Ashby/Brandon-Evansville team came up a bit short of a state berth this season however five of its members created their path to state last week at the Section 6A tournament in Wadena. Hunter Gruchow, Anthony Sykora, Jordan Lohse, Nathaniel Kisgen and Devin Stone joined the other 667 grapplers in St. Paul to find out who was who in the Grand Daddy of Minnesota wrestling.

The following are a listing of each of the Knights state entrants, their matches and a statement about each from Knights Head Wrestling Coach Brandon Gruchow. All numbers following hashtags represent the rankings of wrestlers prior to the tournament via the Guillotine.

Gruchow, ”Hunter started us out and just about snuck out a pin against Williams from ACGC as he had him on his back a couple of times.  It looked tight but he just could not seal the deal and ended up losing by a major.  You can never count Hunter out of a match.   I felt like Hunters second match of the day vs Anaya from Adrian was just more physical and Hunter could not keep up with his physicality.  I think that this tournament was a great experience for him.  He will now know what to expect at his next State tournament experience and can improve on for future appearances.  It was also a cool Dad moment getting to coach him in the state Tournament!”

Gruchow, ”Sykora had a tough fought battle with his Frazee opponent Hiemenz.  This was not the first time they have wrestled this season and that is always tough.  Anthony stuck in there.  He found a way to make it happen and earned himself a solid win. His next match was vs. the second seed of the tournament DeFrang of Dover-Eyota.  Anthony wrestled hard and was able to score on reversals; he just gave up too many take downs and came up a little short.  The thing about Anthony is you can never count him out because he is a very dangerous wrestler on his feet.  He proved that when he threw his next opponent Straumann of ACGC, to his back at the beginning of the match.  These two have also met earlier in the season making it tough once again.  I think Anthony gave it everything he could to try and pin him that he was depleted of that energy he needed to finish and win that match.  Sykora is only a freshman and he does a great job competing with these older opponents, I know that his time is coming and he will be a placer and top finisher in years to come.”

Gruchow: ”Being the six seed Jordan Lohse expected a win and his confidence was up.  Jordan Lohse cruised through his first match racking up nine points before pinning his opponent in the third period.  Although he wrestled more cautious than normal, I would say he wrestled smart.  He continued to wrestle cautious and smart into his next match as well.  Conditioning seemed to be in his favor when he won his double overtime match vs. the number three seed, Baxter O’Reilly of Goodue.  At State a win is a win….by one or by fall it gets you into the next round.  Jordan did what he had to do.  In Jordan’s third match of the tournament (semi-finals), he looked extremely well.  He was on the attack and more offensive. He also continued to wrestle smart.  He knocked off the number two seed Holtz of Kimball Area by staying in good position and attacking.  I believe that in this match this was the best I have ever seen Jordan wrestle.  You could see it in him…he was going to find a way to win and he did!  It was a cool moment!  His finals match was tough.  VonRuden of Medford, stayed in great position and Lohse just could get in on a leg attack.  Overall, Jordan wrestled a great tournament and his dedication during and out of season definitely gave him an edge in this tournament.”

Gruchow: ”Nathaniel’s first match was closer than we hoped for but a win is a win.  He got an early take down, was able to limit Fester of ACGC, to an escape, and won a close match.  The Excel is a crazy environment and I think it maybe had an effect on his nerves.  He has never had this experience before.  His second match was fantastic even though he came up a little short, losing 4-5 against Meyer of Minnewaska.  Meyer eventually won his second state title the next day.  Nathaniel looked so good against him and he was in the match the whole time.  It was exciting to see him wrestle at such a high level.  Nathaniel’s third match vs. Hanan from Kimball was tough.  Nathaniel lost control on an early attack that looked to be going in our favor but Hanan’s defense put us in a tough spot that threw the whole dynamic of the match.  I do believe that if Nathaniel had gotten that take down, he would have won.  Unfortunately, he didn’t and that ended Nathaniel’s debut at the Excel. He is only a junior and a seasoned wrestler with many previous wrestling experiences at a high level.  I know he has already set goals for next season’s state tournament placement and I am confident in saying that he will reach them.”

Gruchow: ”Devin wrestled Danny Mosford of HLWW and was in his match the whole time.  Within a couple of points, he hit a takedown attempting to tie up the match before the time ran out.  With all the excitement, I think he just rushed it a bit and did not have the angle to make a successful shot.  Unfortunately, he was done after that match.  Devin has come a long ways.  We are proud of him and his efforts and will miss his leadership and presence on the mat next season.

Coach Gruchow went on to say: ”This was a fun experience.  We were able to enjoy the fantastic sport of wrestling at a very high level.  Our wrestlers fought hard and did what they could do.  Jordan making the finals was definitely an exciting and well deserved.  I am confident saying that the four of them that get to come back next season will work hard in the off-season to make sure they do their best to get back and try to reach new goals.  Others, that did not make the state tournament this year, will also be working hard in the off-season to make it not only as individuals but to make it back as a team!”

Each year the Minnesota Wrestling Coaches Association recognizes achievements or efforts from individuals and teams that are above and beyond what the normal is considered. This season Tammie Olson was honored with the 2020 Publicity/Media Award. Tammie is well deserving of this accomplishment, anyone who has been at a Knight’s wrestling event during the past years would have seen Tammie all over and around the mat shooting fantastic shots of the teams wrestlers in action. She has captured countless moments of Knight wrestling history along with working at several events for other teams. Her photos have been all over the pages of the Grant County Herald, the Ashby/Dalton Post and Craig Olson’s Sports. Tammie also manages the WCAABE Facebook page. Having researched out many of the states wrestling programs social media pages it is safe to say none are as up to speed and current as the work Tammie puts out. The Knights families, fans, wrestlers and coaches are fortunate to have Tammies and her talents in their fold. Congratulations Tammie Olson.

Another MWCA award that is also worthy of mentioning is the team academic award. WCA/A/B-E received the Silver Standard Academic Award. This is accomplished by a team that turns in a collective grade point average between 3.49 and 3.00. Contratulations Knights! We appreciate your efforts in the classroom as much as your efforts on the mat.

A listing of all state placements from Section 6A includes: 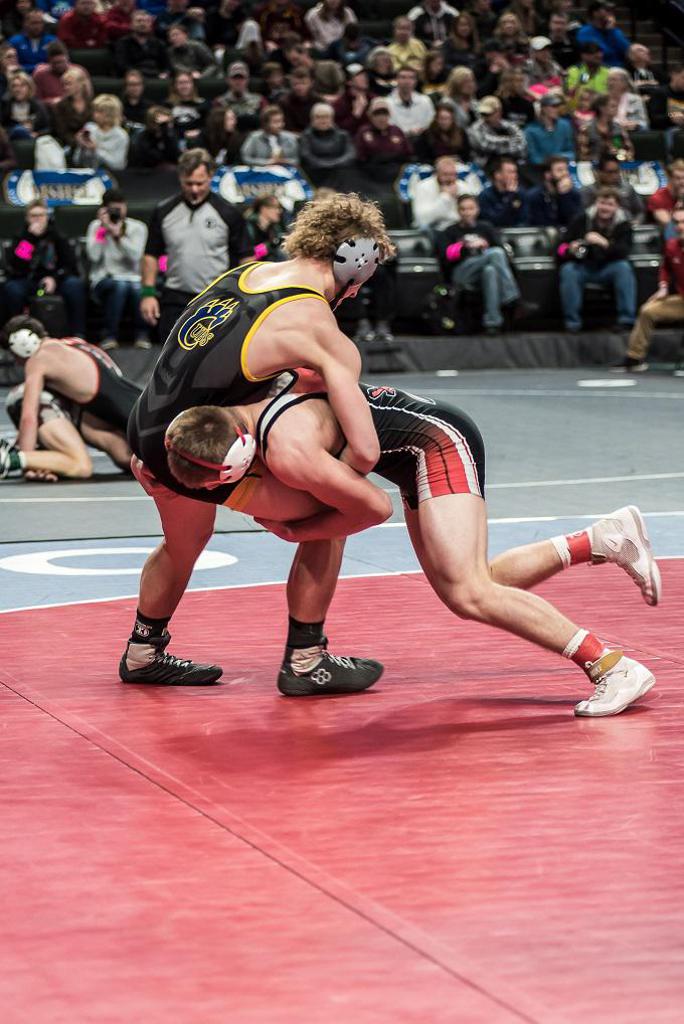 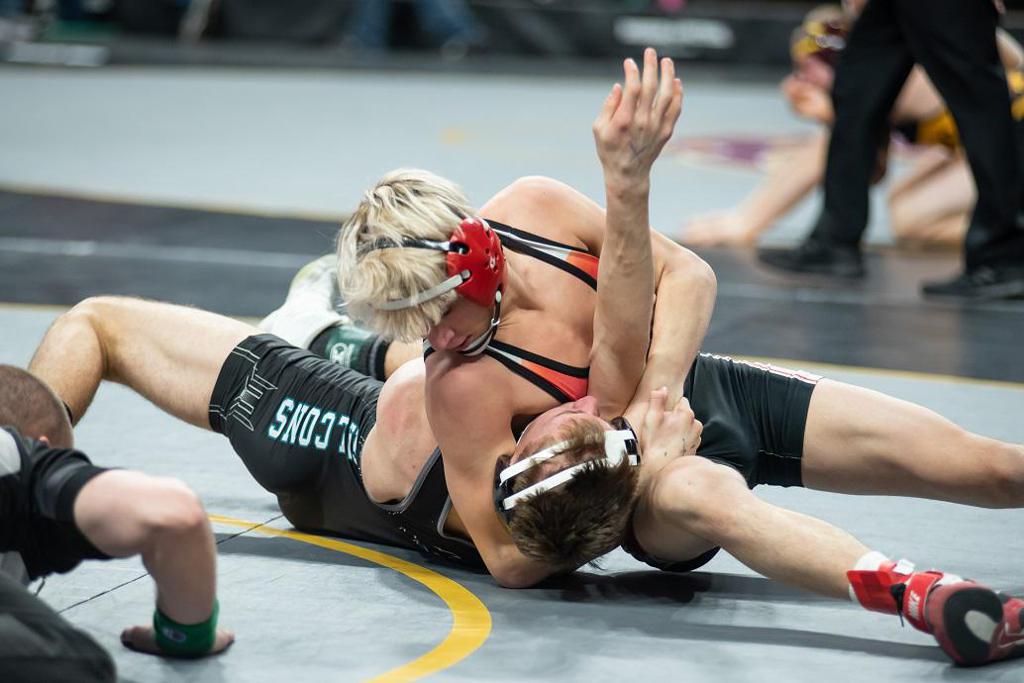 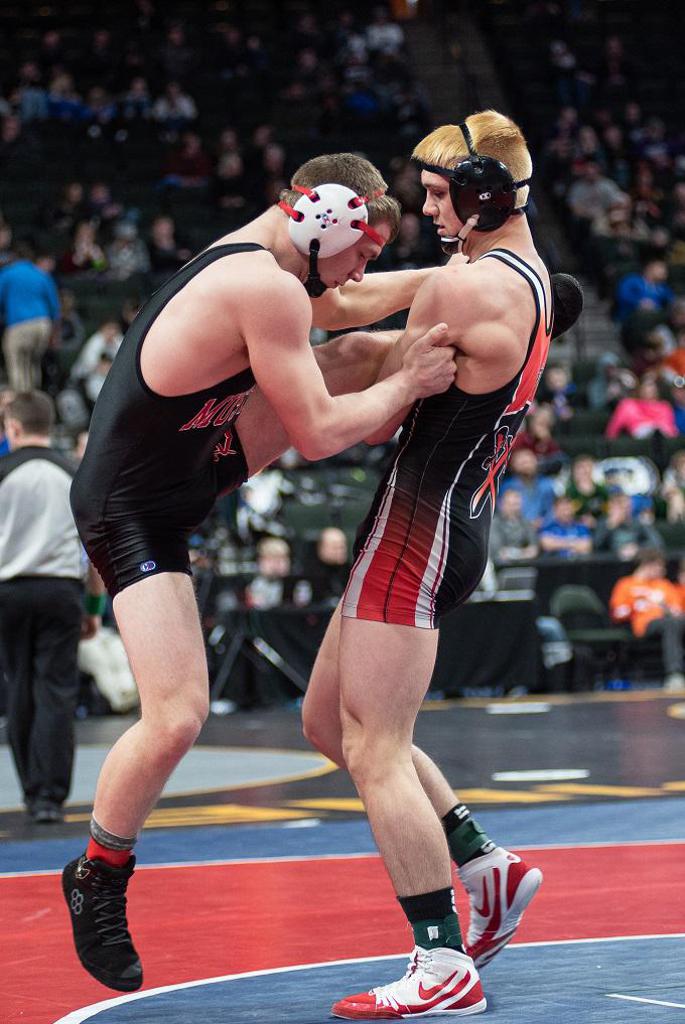