The 12U Otters went on the road to New Hope for the 2020 Knockdown at New Hope Tournament. 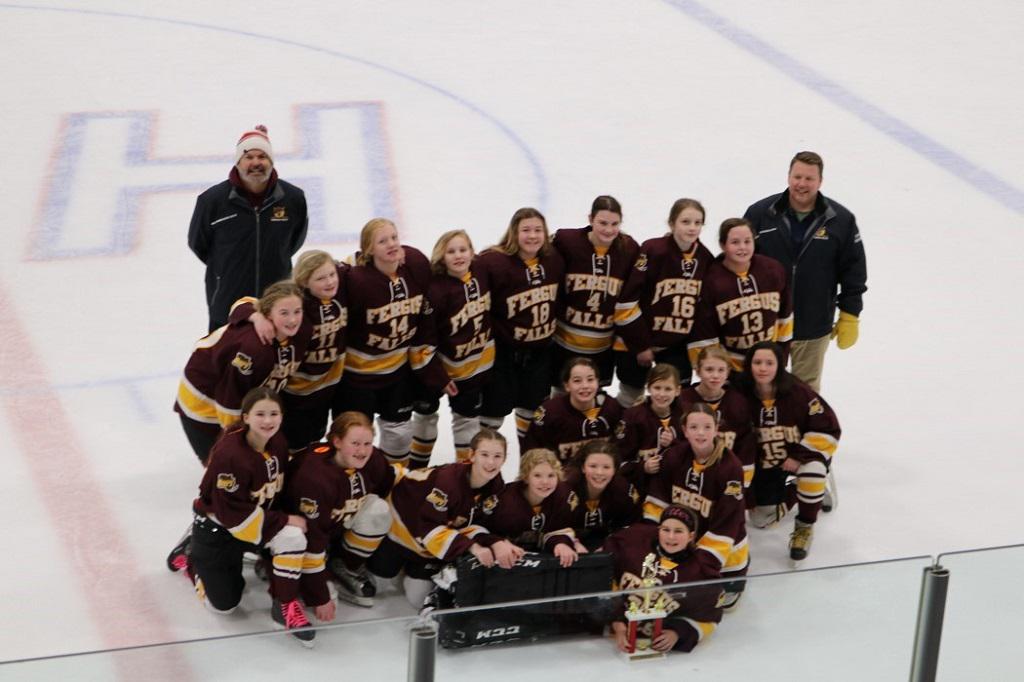 The Otters faced Stillwater Friday night.  The two teams battled it out in the scoreless first period.  Rachel DeBrito would break the ice for the Otters, scoring an unassisted goal with 2:57 remaining in the second period.  Hannah Johnson would make it a two-goal lead for the Otters with her unassisted goal just a little over a minute later.  Stillwater would rally back in the third, scoring two goals only a minute apart with five minutes left in regulation.  After a time out, the Otters would regroup and pull ahead with a goal by Johnson at the four-minute mark.  DeBrito would seal Stillwater’s fate with her second goal of the game to put the Otters up by two with a minute and a half left to play.  Olivia Jurgens faced 16 shots during the night as the Otters moved past Stillwater 4-2.

Saturday afternoon the Otters would square off with the Irish from Rosemount.  The Otters would get off to a slow start and a number of penalties.  Rosemount got on the board first with a goal a minute and a half into the second period.  They would add their second less than 30 seconds into the third to pull ahead of the Otters 2-0.  The Otters began to storm back with a goal by Rachel DeBrito two minutes into the third period.  Shay Katzenmeyer scored an unassisted goal with five minutes left in regulation to tie the game at two apiece.  The Otters controlled the game in the Irish zone for the remainder but could not finish them off and would have to settle with a 2-2 tie.  Ella Sem faced 17 shots in the net.

The Otters faced Hibbing at 9 pm Saturday night in pool play action.  The Otters would get on the board early with a goal by DeBrito a minute into the game.  Izzybelle Kenyon-Woessner would advance the Otters lead by two with her unassisted goal halfway through the fist.  The Otters would pull ahead 3-0 with another goal by DeBrito with just under three minutes left in the second.  Hibbing kept the pressure on the Otters to the end but could not put one past Olivia Jurgens who ended the game with the win and a shutout.

The Otters advanced to the Championship Game Sunday afternoon against the Willmar Cardinals.  The two teams fought hard through a scoreless first period.  The Cardinals #10 Lauren Eilers would score the first goal a minute and a half into the second period and add a second before the period would end, going up 2-0 on the Otters.  The Otters would pressure the Cardinals throughout the game but could not capitalize.  Eilers would make it a hat trick late in the third.  The Otters would have to settle for second place in a long, hard-fought weekend.