Old Man Winter came with a vengeance this week reminding Minnesota and the rest of the Mid-West of his abilities. The Knight grapplers were scheduled to compete Thursday and Friday however the snow and howling wind on Friday saw fit to terminate the quad in Kerkhoven. Certainly a missed opportunity to tune skills against quality teams and individuals. 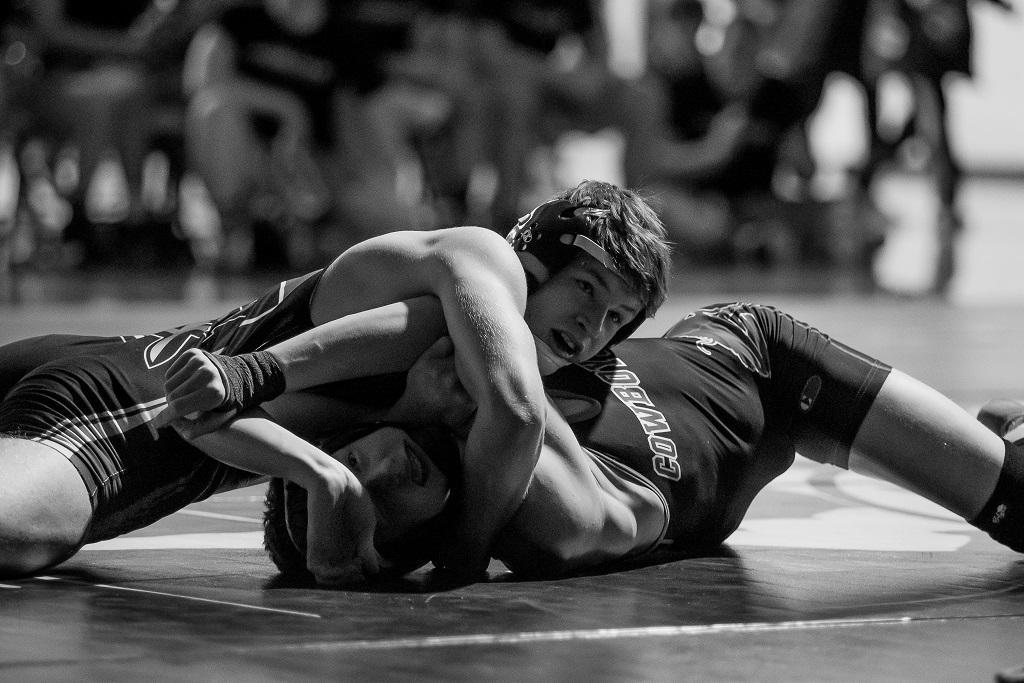 Dierk Goeden with a butcher on Zander Gregor of Breckenridge. (PHOTO by TAMMIE OLSON PHOTOGRAPHY) 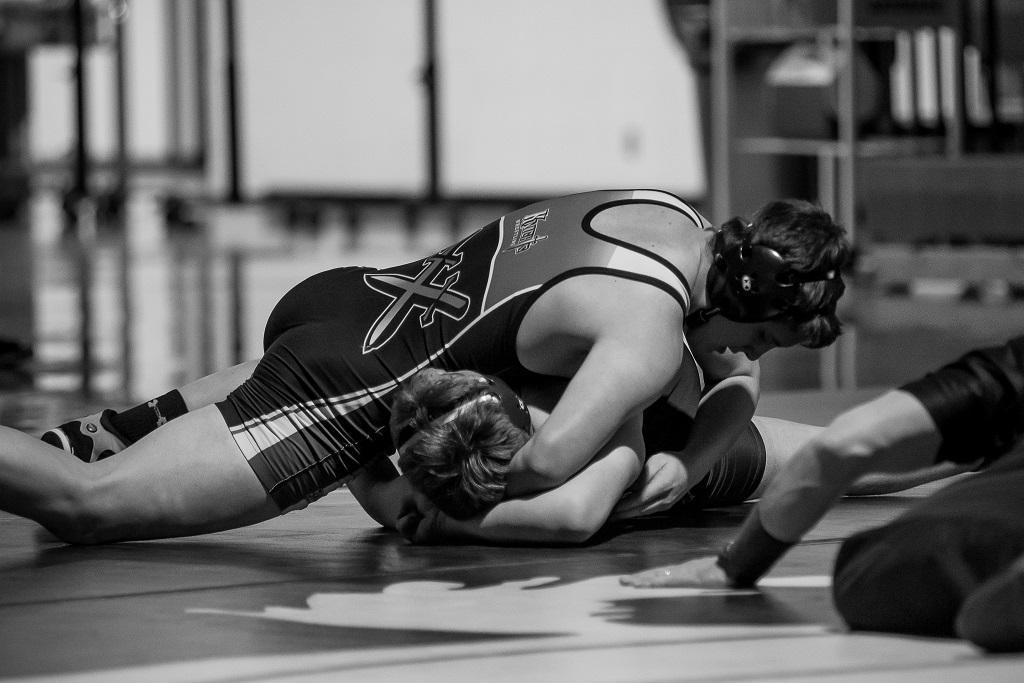 Thursday, January 16th however was the night before the storm. The Knights traveled to Breckenridge for a Section 6A triangular with the Wadena-Deer Creek Wolverines and the hometown Cowboys.

First up for the evening were the Wolverines who brought with them a 2-8 record. The Knights were sporting a 9-2 mark on the season. The lineup for the Knights looked a little different than past weeks as some of the wrestlers have begun their shift to final weights for tournament time. The readers will notice new names at different weights. 106 lb. Adam Lohse started off the scoring for WCAABE with a fall in the first period. Solomon Wales gathered a forfeit at 120 lb. The Wolverines kept it close through 126 lbs as they had gathered a decision at 113 and a fall at 126 to make it a score of 12-9, still in favor of the Knights. The dual was soon ripped wide open as Dierk Goeden and Anthony Sykora each forced a fall. At 145 lb Kade Olson earned a decision and Jordan Lohse followed with a forfeit. After 152 lbs the Knights had a commanding 33-9 lead. The remaining WCAABE victories were earned by Nathaniel Kisgen, Deklin Goeden and Austin Mattson. Final score...51-22.

Anthony Sykora produced a milestone in the WDC dual as his win over Koby Endres earned him his 75th career victory. Anthony is a Freshman at the West Central Area High School. He is a co-captain of the wrestling program and is currently the 9th ranked wrestler at Class A 138 lbs.

The 1-7 Cowboys were the next dual of the night. Breckenridge struggled to produce wrestlers for the contest. In total there were nine forfeits. Out of the matches wrestled WCAABE produced three out of the five scores. Solomon Wales and Colton Lindquist earned a falls at 120 and 182 lbs while Dierk Goeden secured a decision at 138. The final score ended 57-7.

This weeks action finds the wrestlers headed to Browerville on Friday. The competition will be fierce as the teams are all heavy hitters. The squads involved are: #1 Long Prairie-Grey Eagle/Browerville, #4 Belgrade-Brooten-Elrosa, #5AA Foley, #10 Minneota, #13 WCAABE and Black Duck/Cass Lake-Bena.