Prairie’s Edge Dental 10U A Splits Two with Roseau, Improves to 4-1

The 10U Otter Girls’ Hockey Team extended their winning streak to 4 on Saturday, November 23, before dropping game 2 to Roseau later in the day. 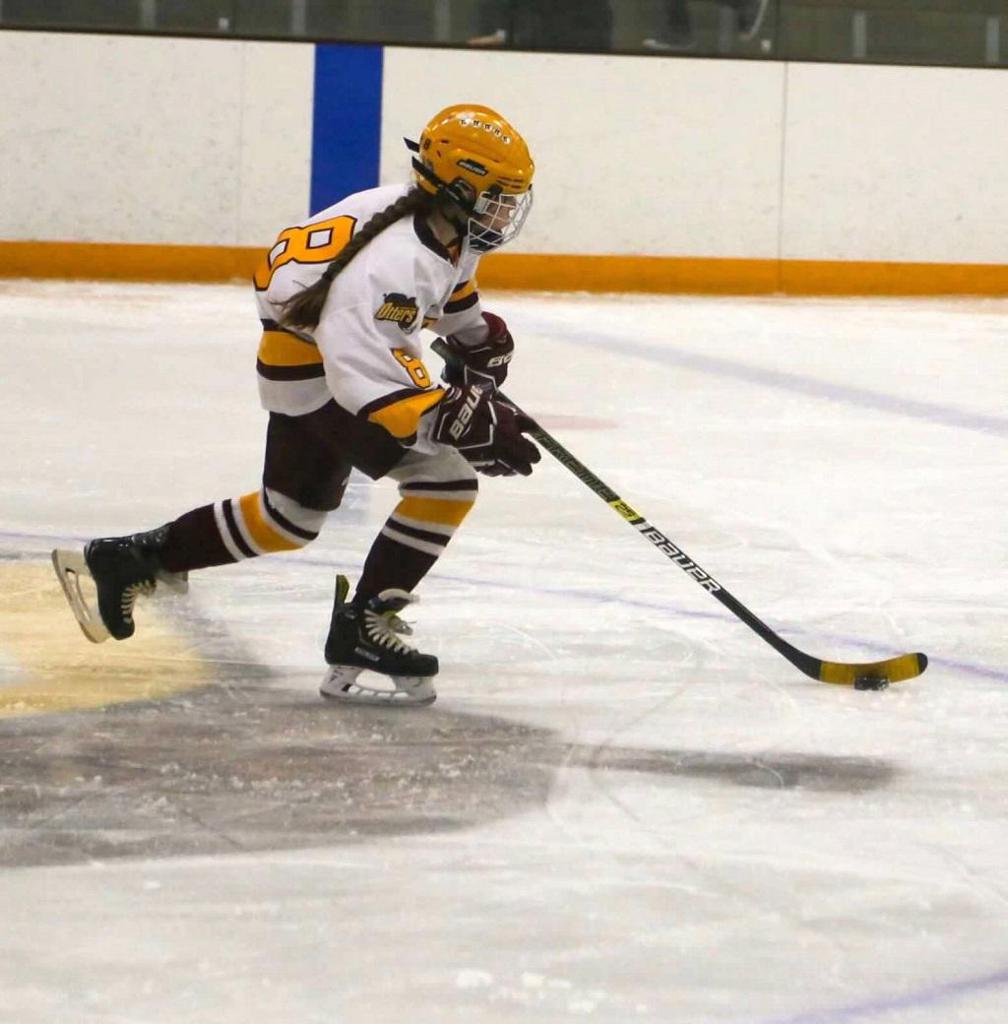 Averie Tonneson skates the puck up the ice before scoring from the blue line against Roseau. Tonneson scored a goal in both games of the double-header. PHOTO by JENNY OLSON

The Otters and Rams took the ice for game one of the day, a Saturday matinee.  The home team struck first, with an unassisted zinger from Lydia Johnson.  The Rams then returned fire and closed the first period with a tie score.  After nearly 15 scoreless minutes of play, Maggie Greenagel brought Fergus back in front with an assist from Evelyn Wedll.  It would be the only goal of the period from either side of the ice.  Early in the third, Maddison Brimhall sprinted ahead of the defense and scored again for the Otters, with Johnson earning the assist.  Roseau scored once more to bring the score to 3-2, but two quick Otter goals sealed the deal:  First, Aubree Nelson scored off a feed from Payton Wolden, and finally, Averie Tonnesson drilled a solo shot from the blue line.  Goalie Mia Olson was outstanding in net, earning 20 saves for the scorebooks.

After a lunch break and some downtime, both teams returned to the ice for an afternoon rematch.  This time it was Roseau scoring first, at the ten minute mark of the first.  Despite being down a skater on a checking penalty, the 10U Otters rallied and evened the score to close the first, with a shorthanded Brimhall-to-Tonnesson goal.  But, in the first minute of the second, the Rams pulled back in front.  The next 29 minutes of play were a goalie duel, with 37 combined shots turned away in the crease.  Despite 23 shots on goal in the final two periods for the Otters, with several of them painfully close to scoring, it would be the visiting team who earned the W this time.  Olson earned 18 saves in game two, while Roseau’s netminder earned 30.